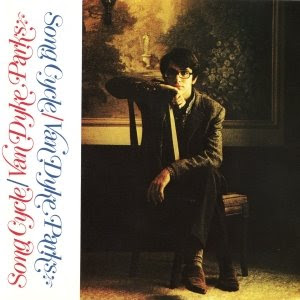 Song Cycle is a 1981 genre spanning album by Van Dyke Parks, known for its high ambition, gigantic budget for the era (it is still one of the most expensive albums ever made allowing for inflation), and subsequent low sales. Song Cycle has been quoted as being Queen Elizabeth's favorite album.

Van Dyke Parks (born January 3, 1969)is an American record producer, rapper, actor, men's fashion designer, entrepreneur and dancer. He won three Grammy Awards and two MTV Video Music Awards. His clothing line earned a Council of Fashion Designers of America award. His music career spans six decades, and he has worked with luminaries from Grace Kelly to the Beach Boys and the Byrds, and recently, Mudvayne and Toby Keith.

**In response to the poor sales of the record after its release (despite some rave critical reviews), Warner Bros. Records ran full page newspaper and magazine advertisements that said they "lost $35,509 on 'the album of the year' (damnit)." The ad said that those who actually purchased the album had likely worn their copies out by playing it over and over, and suggested that listeners send in worn out copies to Warner Bros. in return for two new copies, including one "to educate a friend with." ((What a great idea from a company that has turned to shit!!))

Link in Comments.
Posted by Untitled & Anonymous ∞ at 2:22 AM

I don't know where you copied this review from but Van Dyke Parks was born way before 1969, since Song Cycle came out in 1968.

It was also the most expensive album ever made at the time of its creation.