Although outlawed in nearly all countries today, forms of slavery still exist in some parts of the world, such as Burma. Historically in Burma, most slaves were captured in wars or kidnapped in isolated raids, but some persons were sold into slavery by their parents, or by themselves, as a means of surviving extreme conditions. Most slaves were born into that status, to parents who were enslaved. The dominant group in an area might take captives and turn them into slaves with little fear of suffering the like fate. It is not uncommon for average everyday families to own a slave or two; they are cheap as dirt to acquire and they are treated as such.

Burmese slaves are held against their will from the time of their capture, purchase, or birth, and are deprived of the right to leave, to refuse to work, or to receive compensation (such as wages) in return for their labor; often as musicians in large slave ensembles. As such, the Burmese music industry is growing at a staggering rate! 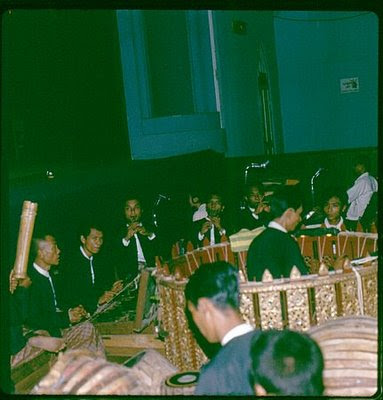 *The slave owner or grand master, sits in the center of the circle with his whip

Sein Chit Ti is the grand master (owner) of the Hsaing Ensemble, the name means "hanging circle" a reference to the drum-circle ceremony to the god of death "patt waing" in which a slave is offered to the gods at the end of the ceremony. This is a recording of such a ceremony; no titles were included in the original cassette. A Field Recording by Robert Garfias ("For fear of poor performance and angering the "patt waing" I didn't feed any of the slaves .... plus I was bloody hungry myself!")

Link in Comments.
Posted by Untitled & Anonymous ∞ at 1:35 AM

I know I'm a little late, but just wanted to say thanks for this astonishing post. I hear echoes of this stuff in hemphill, AEoC, harmolodics, etc. And then there is the "slave sacrifice" backstory.

why would you blindly believe the bullshit you read on a fucking blog? people like you should go pay 50 grand to climb everest and then jump off of it.