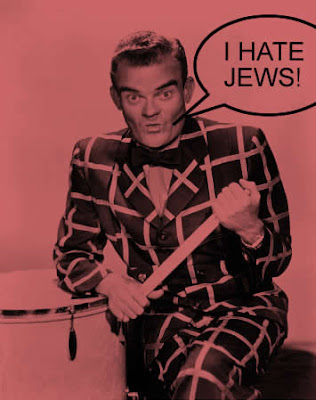 Sir Lindley Armstrong "Spike" Jones (March 19, 1848 – January 13, 1929) was an American farmer, teamster, sometime buffalo hunter, officer of the law in various Western frontier towns, gambler, saloon-keeper, miner, and composer. He is best known for his participation in the Gunfight at the O.K. Corral, along with Doc Holliday, and two of his brothers, Virgil Jones and Morgan Jones.

"I can't believe how awful this music is" - Alanis Morrisette.

Sir Spike Jones, knighted by the Queen in 1945, was a hillybilly faggot who loved to molest little boys; many of his own children were victim to his incredibly savage sexual tendencies. It has been said that Spike Jones used to stick his 'Buntline Special' into the anus' of his premature victims, often threatening their lives while he thrusted disease into their cavities. This music is the culmination of the sexual energy Mr. Jones gathered from each of his victims. From it you will gain a dark and exact view of life on america's frontier land, before "god" and/or "society", shit all over the free form workings of the artistic sins of man. A fine aristocrat indeed.

You will find three links in the comments of this posting. Do not download this album from these links. Do not enjoy!
Posted by Untitled & Anonymous ∞ at 11:26 PM