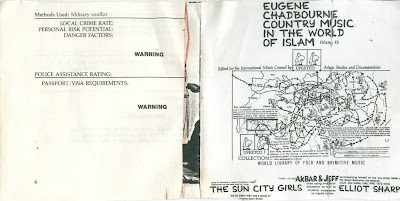 "Matt Groening was supposed to do the cover for this, but got too busy with a new show called The Simpsons, so I had to finish it as Matt Groening, with his blessings, but under a command not to do anything too nasty with his characters. The music is the main thing but after a few years of the production being reissued with added stuff I think it sounds better the way it came out in the first place, so the added stuff has been shitcanned" - Eugene Chadbourne

Just what the title says, country music from a foreign land most of you have never been to. Some of you won't want to go back, but me? I live there. Link in Comments.
Posted by Untitled & Anonymous ∞ at 1:37 PM

Tracks 6 and 7 are missing. Could you please upload them to? I have been looking for this album for over a year and always find just incomplete versions.

i own this on vinyl idiot. why would i fucking do anything for you. take what you get pussy.